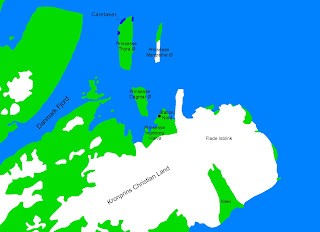 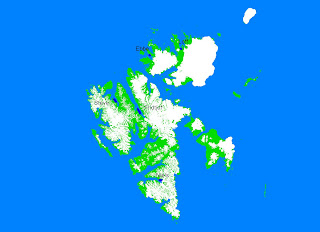 The brent geese each year leave the spring-staging areas in Denmark during the last week of May and return to the autumn staging areas in England and Denmark during the first three weeks of September (median 10 September). Third week of July is thus ‘halfway’ in the summer area, and also the time when all geese are expected to have begun moult by shedding their flight feathers. The status for our six remaining feathered friends is summarized above with two maps showing their moulting location during 18-24 July and a little table below summarizing their status and distances moved so far (i.e. from departure untill 18 July). All but one apparently failed to breed.

We have lost contact to two geese. Jan Ove lost his transmitter over Hemsedal (PTT collected on the ground in Hemsedal without any sign of a carcass, as reported by our local finder Endre Ulsaker). Magnar might also have lost his transmitter when crossing the north Atlantic on 19 June, or he succumbed when he flew into head-winds and quite miserable stormy weather!
Posted by the Brenttags team at 08:29

All photos and other illustrations on this Blog are copyrighted by Brenttags team members or our collaborators. No use without their written permission.

the Brenttags team
We (Preben Clausen, Tony Fox, Kevin Clausen, Jesper Madsen, Marie Silberling Vissing) are a group of happy goose researchers from Department of Bioscience at Aarhus University who will be sharing the results of the Brentttags project with you