3 May 2012: Status after first Brenttags year

Your blogger have been absent the pasts months because I´ve been busy with other duties and fairly little has happened with the satellite transmittered geese. We have lost contact to most, either because they have fallen off or because we have programmed them to download more GPS positions than they actually can manage with the solar power provided by short winter days around the North Sea.

Status for our eight geese caught in spring 2011:

Ebbe: we still follow. The only goose who has an active transmitter a year after capture. He flew to Svalbard, tried to breed on a nunatak in northeast Spitsbergen, failed and flew to Nordaustlandet to moult. Flew to Lindisfarne to winter. It is uncertain exactly when he returned to Denmark – because we had no signakls between 21 October 2011 through 1 March 2012, but 2 March he was back in the surroundings of Boddum in the western Limfjord area. These movements by 3 May 2012 involves an annual journey off approx. 10,000 km. The maps gives the whole route – where the yellow line shows the spring and moult migration routes, and the blue gives the autumn and winter flights. 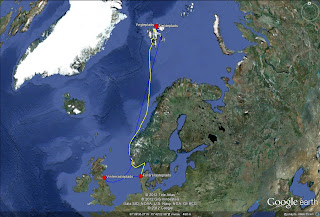 Posted by the Brenttags team at 08:36

All photos and other illustrations on this Blog are copyrighted by Brenttags team members or our collaborators. No use without their written permission.

the Brenttags team
We (Preben Clausen, Tony Fox, Kevin Clausen, Jesper Madsen, Marie Silberling Vissing) are a group of happy goose researchers from Department of Bioscience at Aarhus University who will be sharing the results of the Brentttags project with you